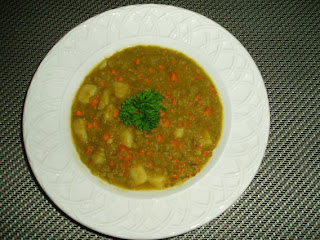 When I was growing up, my mother and grandmother made split pea soup using a ham bone for flavor. Now that I no longer eat meat, I have discovered that a good vegetable broth can give a soup enough flavor that even carnivores will enjoy it and not miss the meat.

Some cooks like to puree their split pea soup, and that's fine. But for this particular recipe, I like to leave it chunky, as the diced veggies give the soup a hearty, satisfying texture.

In a large pot or Dutch oven, heat the olive oil over medium heat. Add the onion, carrot, and celery, and saute for 3-5 minutes, until the vegetables start to soften.

Add the vegetable broth, split peas, potato, bay leaf, salt, and pepper. Raise the heat to high and bring the mixture almost to a boil. Reduce the heat to low, cover, and simmer for 1 to 2 hours, or longer as needed, stirring occasionally, until the split peas have broken down and the vegetables are tender.

Uncover. Raise heat to medium or medium-low, and simmer, uncovered, stirring occasionally, for 20-30 more minutes, or as needed, to reduce the liquid as desired to a thick soup consistency.

Remove and discard the bay leaf before serving.