Portobello Cheesesteaks with Peppers and Onions 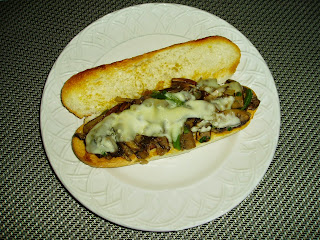 My hometown of Philadelphia is famous for its cheesesteak sandwiches. This healthier alternative substitutes "meaty" portobello mushrooms in place of the beef.

This vegetarian version is every bit as tasty and satisfying as the famous steak sandwiches you'll find in South Philly.

Remove the stems from the portobellos, and discard the stems. Using a spoon, scrape the dark gills from the underside of each portobello. Discard the gills. Thinly slice the portobello caps and then cut the slices in half crosswise to make shorter pieces. Set aside.

In a large skillet, heat the olive oil over medium heat. Add the onion, and saute for 2-3 minutes, until soft but not brown.

Add the bell pepper and the portobellos, along with salt and pepper to taste. Saute for 5-7 minutes, until all the vegetables are cooked through and most of the rendered mushroom liquid has evaporated.

In the pan with a spatula, divide the portobello mixture into 2 long portions roughly shaped to fit the rolls. Arrange 2 provolone halves over each portion. Reduce heat to low, cover, and cook for a minute or two, until the cheese just starts to melt.

Uncover and cook for another minute or two until most of the broth has evaporated.

Meanwhile, preheat broiler. Split the rolls open, but do not cut them all the way through. Lay them open on a broiler-proof pan. Broil until lightly toasted. Remove from heat.

Fill each roll with half of the portobello mixture, cheese side up, and serve.