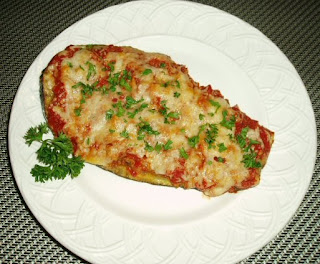 In this variation of Eggplant Parmesan, eggplant halves are stuffed with a vegetarian sausage mixture, and then topped with sauce and cheese and baked.

It makes for a satisfying entree, especially with a green salad on the side. Or cut it into smaller pieces and serve as an appetizer or snack.

Slice eggplant in half lengthwise.

Using a tablespoon or soup spoon, scoop out the flesh of each eggplant half, leaving enough around the sides and bottom to form a sturdy shell.

Coarsely chop the eggplant meat and set aside.

Brush the eggplant shells with 1 tablespoon of the olive oil, place them cut side up in a in a deep oven-proof baking dish or pan, and set aside.

Heat the remaining 2 tablespoons of olive oil in a non-stick skillet over medium heat. Saute the sausage and the chopped eggplant flesh for 3-5 minutes, until they start to turn lightly golden.

Remove the sausage mixture from the heat. Stir in the breadcrumbs, 1 tablespoon of the parsley, 1/2 cup of the marinara sauce, 1/2 cup of the mozzarella, and salt and pepper to taste. Mix well.

Stuff the eggplant shells with the sausage mixture.

Cover with foil, and bake for 20 minutes.

Remove and discard the foil.

Bake, uncovered, for another 15-20 minutes until the eggplant is tender and the cheese is melted and bubbly.

Sprinkle with the remaining 1 tablespoon of parsley.