Mock Chicken with Mushrooms and Grapes 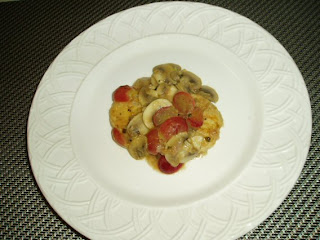 This recipe was inspired by a chicken dish I enjoyed at a fine restaurant many years ago when I was an omnivore. I created my own version and veganized it by using mock chicken breasts and no butter. As it turns out, there's nothing missing here.

I like to serve this with a green vegetable and some steamed brown rice.

Mix the flour, salt, and pepper, and coat the "chicken" in the flour mixture.

Add the remaining 2 tablespoons of olive oil to the same skillet, along with the shallots, mushrooms, and salt and pepper to taste. Saute over medium to medium-high heat for 2-3 minutes, until the shallots are soft and the mushrooms are lightly golden. Remove the shallot-mushroom mixture from the skillet and set aside.

Add the wine, broth, and tarragon to the same skillet, increase heat to high, and reduce the liquid by half.

Return the "chicken" and the shallot mushroom to the skillet. Add the grapes, along with additional salt and pepper as needed.

Saute over medium heat for 2-3 minutes, until the sauce is slightly thickened.

Spoon the mushrooms, grapes, and sauce over the "chicken", and serve.