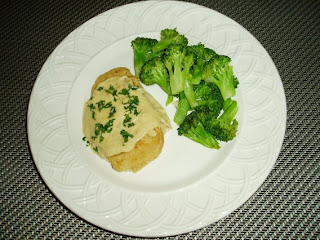 This was adapted (and vegetarianized) from a chicken recipe in The Frog/Commissary Cookbook, which features recipes from some restaurants here in Philadelphia that were very popular during the city's restaurant renaissance of the 1970s and 1980s.

The original recipe calls for brandy, but I prefer the fuller flavor of a good cognac. You can substitute brandy for the cognac if you wish, and it will still be good.

I like to serve this recipe with our Broccoli in Shallot Butter, as shown in the photo above, and perhaps some rice.

Mix the flour, salt, and pepper. Toss the "chicken" pieces in the flour mixture, shaking off the excess.

In a medium skillet, heat the vegetable oil over medium to medium-high heat. Add the butter along with the "chicken", and saute until the "chicken" is lightly golden on all sides. Remove the "chicken" from the skillet and set aside.

Add the shallots, vermouth, and brandy to the same skillet. Turn the heat up to high and cook, stirring occasionally, until the liquid is reduced by half.

Whisk in the mustard, then whisk in the cream, along with salt and pepper to taste. Lower the heat to medium, and cook, whisking occasionally, for 2-3 minutes, until the mixture is the consistency of a light gravy.

Add the "chicken" back into the skillet. Simmer, stirring occasionally, for 3-4 minutes, to blend the flavors. If the sauce seems too thick, add some water, a tablespoon at a time, until it is the desired consistency.

Transfer the "chicken" to serving plates. Top with the sauce, sprinkle with the parsley, and serve.