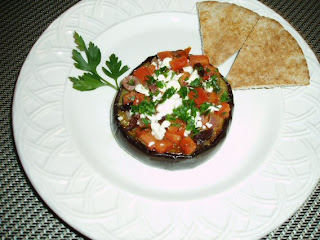 This healthy recipe features the flavors of Greece. It works well as either an appetizer, an entree, or a side dish.

Serve with Pan-Grilled Pita Wedges as shown, or with hearty, crusty baguette or rolls.

Cut 4-6 crosswise (circular) slices from the biggest part of the eggplant, about 3/4 inch thick. Discard the ends. Peel the eggplant slices, if desired.

Place the eggplant slices in a colander, sprinkle with salt, and let sit for 30 minutes. After the 30 minutes, rinse the eggplant well under cold running water, and then pat dry with paper towels. Season the eggplant on both sides with salt and pepper.

In a large skillet, heat 3 tablespoons of the olive oil over medium-high heat. Add the eggplant slices, and cook for 3-5 minutes, until the bottom is golden.

Turn the eggplant over and cook for another 3-5 minutes until golden on both sides. Remove the eggplant from the skillet and set aside.

In the same skillet, heat the remaining 1 tablespoon of olive oil over medium to medium-low heat. Add the onion and garlic, and saute for 2-3 minutes, until soft. Do not let the garlic get brown.

Add the tomatoes, olives, 1 tablespoon of the parsley, and the oregano. Add salt and pepper to taste. (Go easy on the salt, as you will be adding feta cheese, which is salty.) Saute for 1 or 2 minutes.

Return the eggplant to the skillet. Spoon the tomato-olive mixture evenly over the eggplant. Top with the feta.

Pour the wine around the topped eggplant in the skillet, cover, and simmer over medium to medium-high heat for a minute or two until the cheese starts to melt.

Uncover, and simmer until the wine is reduced to a light glaze.

Sprinkle with the remaining 1 tablespoon of parsley, and serve.