Crostini with Garlic-Balsamic Portobellos and Provolone 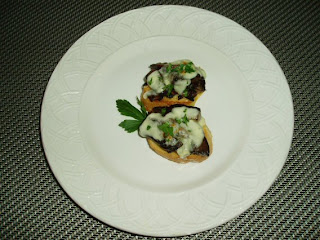 These garlicky portobello mushroom crostini make a delightful appetizer or snack. You can also make these a meal by adding some hearty soup or a salad.

After the portobellos have marinated, heat the remaining 1 tablespoon of olive oil in a medium-size skillet over medium to medium-high heat. Add the portobello mixture, and saute for 5-6 minutes, until the portobellos are soft and most of the rendered mushroom liquid has evaporated.

Add the balsamic vinegar to the skillet, and saute over medium heat for a minute or two.

Add 1 tablespoon of the parsley to the skillet, along with salt and pepper to taste. Saute for another minute or two to blend all the flavors.

Top the toasted bread slices evenly with the portobello mixture. Top each of the crostini with a piece of the provolone. Broil until the provolone is melted and bubbly.