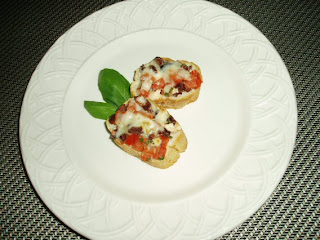 For this recipe, I started with our popular Bruschetta with Tomatoes, Olives, and Feta, added shredded mozzarella, and heated it under the broiler until the cheeses started to melt. The result is a richer, cheesier version of the original, for when you're in the mood for something light but truly decadent.

It's great on its own as an appetizer or snack, or as an accompaniment to a main-dish salad or soup meal.

Meanwhile, in a small bowl, combine the remaining ingredients except for the mozzarella. (Note: Go easy on the salt, as the feta is salty.)

Spoon the tomato mixture evenly onto the bread slices. Top with the mozzarella.

Broil until the mozzarella is melted and bubbly.