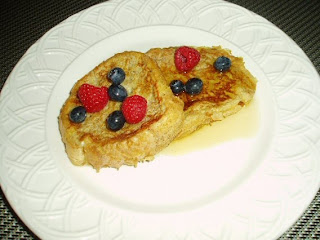 This is a basic, old-fashioned version of French Toast, which did indeed originate in the Mediterranean country of France. However, while the French traditionally cook this in butter, I prefer to lighten it up by cooking it in just a small amount of vegetable oil (preferably canola).

Flavored with earthy vanilla extract along with cinnamon and nutmeg, this recipe packs a lot of flavor, but doesn't require much time or effort.

In a large bowl, beat the eggs with a whisk, and then whisk in the milk, sugar, cinnamon, vanilla, nutmeg, and salt.

Add the bread slices to the bowl, toss so that each slice is covered with the custard mixture, and let it sit for several minutes so the bread can absorb the custard.

Heat the oil on a griddle or skillet over medium heat. Place the coated bread slices on the griddle and cook, turning once, until golden brown on both sides.

Top with powdered sugar, syrup, fruit, and/or other toppings, as desired.